FRIEND OR FOE - THEY'RE BACK (Plus player faces of course)

FRIEND OR FOE - THEY'RE BACK (Plus player faces of course) Look out world, the boys are back. Yes, they are back. Once hailed as the hottest properties in football. Everyone wanted a piece of Dynamic duo that was Sion and Marco Veddi. They landed with an almighty bang in the early years of the DTL and turned the footballing world upside down. Their flair on the pitch was as much a joy to behold as their antics off the pitch.

Sion and Veddi, within half of a season, were household names. They were on everyone’s lips, and they dominated the headlines daily.

But as their new found club were soon to realise, these two were Lions being kept in a dog kennel. However as always it was not all wine and roses. They were too big for the league that contained them. The powers at be knew this and sought ways to destroy what had clearly became a match too powerful for anyone to stand against.

Were they successful? They were but at what cost? They managed to turn these two catalysts against each other. But in doing so, they drove the final nail in the coffin of their beloved league. As ripping these two apart would cause a tremor so large that everyone on world football felt it. The aftermath was beyond repair and eventually the DTL admitted defeat and went quietly into the night.

Skip on almost a decade and we land in Portugal. Newly promoted GD Tigres make the headlines when they announce Marco Veddi has come out of retirement to join The Wildcats and help make a name for them. Are they done? Hell no! Within hours of this capture, the world is stunned to silence by the news that GD Tigres have convinced Sion to come out of Retirement also.

The most electrifying men in football, back in the game. It’s exciting. From a neutral point of view, it is great to watch and we will be going straight to the back pages every day, anticipating some over the top story about the antics of Veddi/Sion. But the fans must have their hearts in their throats, as they know that both are capable of making or breaking GD Tigres. With one hand they could turn them from small club to League champions. But with the other hand, they could turn the club into a distant memory. But what way will it go?

We have had a promising start to the campaign, seeing the guys start positively. Their first contribution to GD Tigres saw them linking up to score a vital goal and secure the team’s first ever point in DTL Portugal history.

Seeing them celebrate that goal the way they did filled us all with nostalgia, and made us ask the question. Are they friends again, or are they just playing up to the camera? We know they are both well versed in doing so.

Both men back in the orange and black, with a tiger on their breast. It is like we have gone back in time and are watching these lads being revealed to the Guerra Santa fans by then manager, LFC_Jack. But like they were soon to find out, has this tiger bitten of more than it can chew? Time will tell.


Sion & Marco Veddi Escreveu:Clearly this is just shameless self promotion, but we love it!!!

Below is the link to our face and hair files. 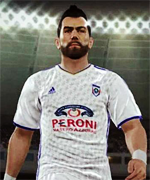 Re: FRIEND OR FOE - THEY'RE BACK (Plus player faces of cours

Re: FRIEND OR FOE - THEY'RE BACK (Plus player faces of cours